This story picks up after Stephen was stoned. Saul (see note below on "Saul vs Paul") was continuing to persecute the church. He even went to the High Priest and had him send letters to the synagogues in Damascus warning them that any followers of Christ (or "the Way" as it was referred to here) would be bound and brought to Jerusalem for trial. Saul was presumably on his way to Damascus to make good on his threats when something dramatic happened...

As Saul was traveling, suddenly a bright light shone around him. A voice called out to him by name! "Saul, Saul, why are you opposing me?" Saul knew this was supernatural - not an ordinary light and voice. So he called out and asked, "Who are you, Lord?". It was Jesus! “I am Jesus,” he replied. “I am the one you are opposing. Now get up and go into the city. There you will be told what you must do.” (Acts 9:5-6)

There were men traveling with Saul and they heard this too, but they didn't see anything. And then Saul got up from the ground, opened his eyes, but he couldn't see anything! He was blind for 3 days and couldn't even muster the strength to eat anything. The first part of God's plan to get Saul's attention was complete. Now, he enlisted the help of someone else to finish the job.

God spoke to man named Ananias (who lived in Damascus) and told him to go to where Saul was staying, the home of a man named Judas on Straight Street. God told Ananias that he had already given Saul a vision of a man with his name coming to lay his hands on him so he could see again. Initially Ananias was scared. Don't forget about the letter Saul had sent to Damascus ahead of his trip there!

But God reassured him that Saul had been changed by his experience on the road to Damascus. So Ananias obeyed and went to the house where Saul was staying. Ananias laid his eyes on Saul and confirmed to him that the man he saw on the road there was in fact Jesus.

Just then something like scales fell off Saul's eyes and he could see again! He was baptized, began eating again, and regained his strength.

Immediately, Saul began meeting with the believers in Damascus and preaching in the very synagogues he threatened to kill Christians in. Finally, Saul's great passion and intellect was being used for Jesus instead of against him. Many of the believers still feared him, though. Surely someone like Saul couldn't just change that suddenly, could he?

The Jews that were living in Damascus were not happy about this at all! They began to think about ways they could kill Saul. Saul found out about it and the Christians in Damascus helped him escape the city in a basket they lowered through a hole in the wall. Paul went back to Jerusalem, but the Christians there were afraid of him too! But a man named Barnabus helped the believers in Jerusalem accept what happened to Saul. He told them all about Saul's journey to Damascus and his experience there. So Saul stayed in Jerusalem and boldly spoke about Jesus and told his story. The Jews in Jerusalem didn't like him anymore than the Jews in Damascus, though. So the Christians in Jerusalem had to help Saul escape there too and he ended up back in his home of Tarsus for a while.

In later lessons, we will learn about this man Saul (also called Paul) and his huge impact on expanding the early church throughout the Middle East and into Europe.

Saul is also referred to as Paul in the New Testament. Some mistakenly assume that Saul's name was changed at the point of conversion to Paul. While this is a very common occurrence in the Old Testament when God calls someone out for a special work (Abram to Abraham, Jacob to Israel), we have no indication that this is what happened here. The early mentions of the man in Acts are almost exclusively "Saul", while the later mentions and all the later books are exclusively "Paul". But the only clue we have of a transition comes in Acts 13:9: "Saul, who was also called Paul"...

Saul is a Hebrew name. Paul is a Greek name. Perhaps since Paul's ministry focused on the Gentiles (and Peter's focused on the Jews), he decided to use his Greek name instead of his Hebrew name. Or maybe he really did go through a name change and he himself chose to mark his conversion by changing how he was named. Or perhaps God did indeed tell him to change his name, but it was just not recorded anywhere in scripture.

Regardless, we should teach our students that Saul in the New Testament is the same person as Paul. We should primarily call him Paul, since that is how is referred to most commonly. 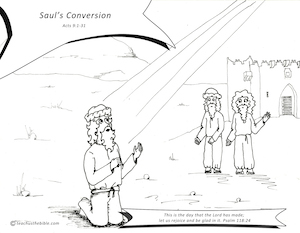 1. Warm Up get your kids talking and engaged

What is the brightest thing you can think of?

Today, we're going to learn about a man in the New Testament that saw a very bright light that changed him forever!

Read story from a Children's storybook Bible for younger children.

For older children, read the story from an age-appropriate Children's storybook Bible or read directly from the Bible.

4. Comprehension Questions make sure they understand the story

First, ask the children if they have any questions about the story. What to do if you don't know the answer?

5. Faith Questions open up a conversation about faith and the gospel; close with prayer

Scripture Saul got up from the ground. He opened his eyes, but he couldn't see. So they led him by the hand into Damascus. For three days he was blind. He didn't eat or drink anything. Acts 9:8-9

Supplies objects familiar to the students

Scripture On his journey, Saul approached Damascus. Suddenly a light from heaven flashed around him. Acts 9:3

Heads up! This activity can be used as an intro to the lesson.

Scripture "Lord," Ananias answered, "I've heard many reports about this man. They say he has done great harm to God's people in Jerusalem. Now he has come here to arrest all those who worship you. The chief priests have given him authority to do this." But the Lord said to Ananias, "Go! I have chosen this man to work or me. He will carry my name to those who aren't Jews and to their kings. He will bring my name to the people of Israel. ACts 9:13-15

Lowered in a Basket Craft

Scripture But his followers helped him escape by night. They lowered him in a basket through an opening in the wall. Acts 9:25

Scripture Right away something like scales fell from Saul's eyes. And he could see again. He got up and was baptized. Acts 9:18

Heads up! This wold be a good intro to the Bible Story

Scripture On his journey, Saul approached Damascus. Suddenly a light from heaven flashed around him. Acts 9:3

Glow in the Dark Paint Road to Damascus

Scripture On his journey, Saul approached Damascus. Suddenly a light from heaven flashed around him.

You should select some Reinforcement Activities to use first before printing!

Start your lesson planning by reading the "Lesson Prep" section about 5 days before you are scheduled to teach.

We provide a "Cliff's Notes" version of the story to help you see the big picture. Also, if you are not using a storybook Bible, you can use this summary as an outline for your own teaching in class.

We place everything you might need to prepare for the actual story telling here (this doesn't include Reinforcement Activity supplies, because we don't know which ones you will choose!). This may include a snack suggestion if there is one that goes well with the story, props you might use in teaching the lesson, and the coloring sheet that goes with each lesson.

This section helps you structure your teaching time.

This is a question that goes along with the story for the day. This is designed to get your kids talking and to build a connection with them.

This is the most important part of the lesson. Use all the creativity you have to tell the story in an engaging, and interesting way. Use props. Be sensitive to the age of your children and tell the story in a way they can understand.

If you would like to have your students read out of the Bible themselves, these are good verses to do it. We recommend they do this after you teach the story, however, and certainly not as a substitute for you teaching a holistic story. While it is a good thing that kids get used to reading out loud and reading the Bible for themselves, elementary-aged children do not typically have the reading skills necessary to be able both read out loud and comprehend at the same time. Also, it is difficult for the other students to really understand what they are hearing. So teach the lesson first, then let them read the Scripture out loud.

These questions can help you ensure your students understood the story. Also, use this time to take the topic where the students want to go. Pray for the Holy Spirit to reveal to them what truths he wants them to learn from the story, and help them understand how this story can be applied to their lives. Keep in mind that elementary school children are rarely capable of abstract thought, so don't boil it all down to a simplified principle for them. But let the Scripture and the Holy Spirit speak to them and be sensitive to where the conversation can go.

These questions help the children think about how this story applies to their own life today. Keep in mind that only your oldest elementary school children will be able to think in abstract terms, but you can ask some basic questions that will hopefully open up a conversation about what the children believe. By the prompting of the Holy Spirit in response to His Word, you can encourage your children to surrender their lives to God and present the Gospel to them. Also, feel free to share your own faith experiences with them (being careful not to delve into "adult" struggles, like marriage, sexual sin, etc).

We typically include a memory verse every 4 or 5 lessons, so you can work for several weeks on the same verse. Feel free to give out rewards to the students who successfully memorize the Scripture.

Use reinforcement activities to help your students remember the story. These activities are not just crafts and games.

Several days before you teach, choose the activities you want to do with your class. Take note of any supplies that are needed. You can place a check next to the name of the activity so that you can easily see which ones you are planning to use when you come back to Teach Us the Bible.

Every activity has a Scripture that helps you see the tie-in from the activity to the story. Make sure to help the students see the tie-in so they don't think you are just playing a random game.

Children naturally have questions. And sometimes, we don't know the answer! Here's what to do*:

(* Adapted from "Children's Ministry in the Way of Jesus", by David M. Csinos and Ivy Beckwith)

Just wanted to point out here that you should follow all copyright laws when it comes to using videos.

Even if a video is on YouTube, that doesn't mean it is available for you to show in a group setting automatically.

Check with the video publisher for usage restrictions, whether you need to pay for a license to show a video, etc.

We include these videos as options for you to consider and for your own personal study.